Redemption of a Miner, Part One

In our last installment of the Hullhumper Saga, we introduced miner 12151985 and discussed his loss of a Gnosis to ComedianII. In this very special post, we will examine 12151985’s evolution from local chat tears faucet to newly minted Pathfinder.

Upon examination of the Rascal’s Brigade Vs. Hullhumpers Deep Space Mineral Extraction war report, one notices a strange set of irregularities. If I may direct your attention to a certain portion of that document, you will notice that not all is well in Copenhagen: 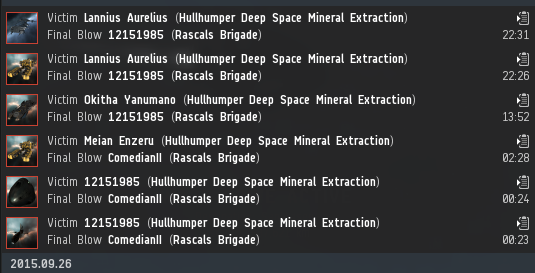 The explanation, however, is simple. After dunking 12151985’s Gnosis, we had a lengthy discussion on the merits of the mining lifestyle (None) and the benefits of entering the PVP arena. In truth, it was quite the heart to heart. To my great delight, 12151985 expressed a strong interest in expanding his playbook and leaving the grind behind! Apparently, not only had he grown bored of lasing rocks all day, but my shenanigans had piqued his fancy. This is step one. The miner realizes that mining is boring and that shooting spaceships is fun. We were making progress.

To kindle this relationship, I sent 12151985 a corporation invite. The next day I had found that not only had he joined Rascals Brigade, but 12151985 had proven himself a worthy addition to the corp. He had managed to destroy a Hullhumper Venture….

Unfortunately, Butch Von Hullhumper, CEO of the Hullhumpers, had neglected one of the main duties of CEOs everywhere: to educate his members. Not only were his pilots woefully unprepared for a war, they simply did not recognize the difference between 12151985 as green star in local, and 12151985 as red-skulled war target in local. All 12151985 had to do was convo his former corpies, ask them where they were, and take care of business. Worry not, Butch Von Hullhumper, we educated your corp members for you! Indeed, throughout the remainder of the war, the Hullhumpers were far more aware of changes to local chat, and all signs point to them finally recognizing the difference between green star and red skull. In fact, simply entering system with war targets and blatantly dscanning the systems no longer worked for the duration of the war. New strategies had to be employed. The Hullhumpers evolved to meet the pressure Rascals Brigade put on them —  now that is education at its finest.

It was with great pleasure that I watched 12151985 progress from isk-drone to Pathfinder. His redemption was at hand! He only had to reach out and take it.


We will return to the the story of 12151985 and the Hullhumpers war, but after a short detour. In our next edition, we’ll take a break from the current saga and look into a topic that truly is close to the hearts of Pathfinders everywhere — hunting Mobile Tractor Units.
Posted by ComedianII at 1:22 PM