In our last installment, we met angry, confused miner Karne Audene. In chat logs delivered to me by concerned citizens, we discovered that Karne was out for real life blood. The question remained, would I prosecute this miner to the fullest extent of the EULA, or make an attempt at reforming him?

Eve is a dangerous place. One is often forced to destroy one’s enemies without hesitation or second thoughts. However, sometimes there is room for mercy. The tenets of the Golden Path are there to save Eve from the uninspired, the woeful, and the bored. In saving Eve we sometimes must extend the olive branch and give mercy to those who wrong us.

I endeavored to save Karne. Or more accurately, to allow him to save himself. I decided to convo him. 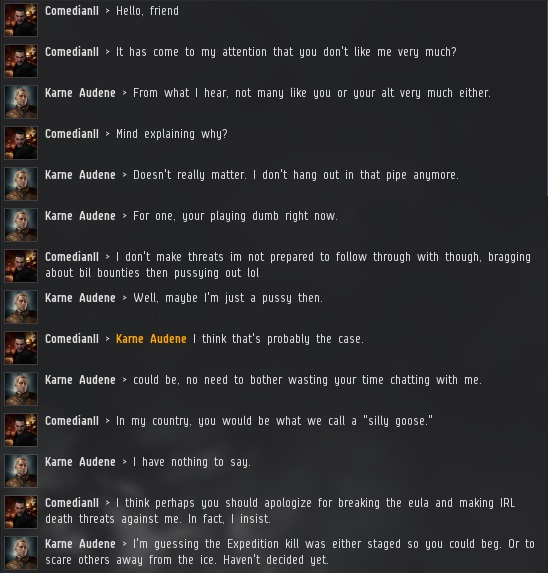 Karne assured me that he was not the only one who dislikes me; I have to agree with him on that account. Often the right thing isn’t the easy thing. It’s not the pleasant thing. It’s the right thing. I don’t expect praise, riches, or even love from those I save, but I save them nonetheless. Consider a child trying to consume some dangerous chemical. The parent takes the substance in question away and the child cries. Even though the child is upset, the parent has done his or her duty. I think you can figure out who is who in this situation.

Not surprisingly, Karne is still clinging to his conspiracy theories. I must have ganked that frigate to beg for ISK later, or to simply scare others. He wasn’t sure. I’m not sure I am either. I may have done it because of Joe Camel.

In the image below we see that Karne then denies making the threat. Surely he would never threaten someone’s real life person! However, when confronted with the chat log he specifies: He never threatened me (ComedianII), he was threatening Phuleproof (Who he thought was ComedianII. Or was I Phuleproof? It all gets very confusing).

Let’s break it down and examine the logic here: 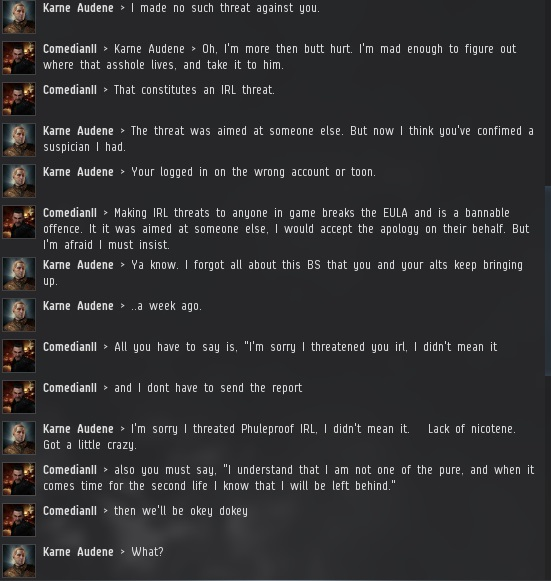 This “your” and “you’re” thing bothers me perhaps more than it should.

A partial success! Karne takes the first step and both confesses and apologizes. However, he seems surprised that I request a second Statement of Contrition. This particular Statement was taken from a MinerBumping article published years ago, and I felt that it fit the situation. Kudos to Agent Marshal Alice for coming up with it. 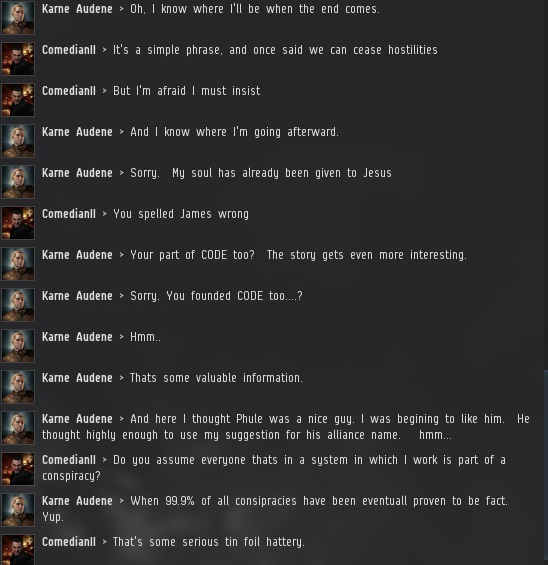 It is right to give The Saviour thanks and praise.

Oh boy. Karne refuses to voice the Statement of Contrition because of his religious beliefs. However, when I correct him on the topic of who is the true Saviour, his conspiracy wheels spin out of control.

What can mortal men do against such powerful intellect?

Karne wastes no time in reminding me that he has an IQ of 148, and that he has in fact been invited to MENSA, a society of highly intellectually capable individuals. I’m amazed that he even accepted the conversation invite from one so mentally feeble as myself.

Not only that, Karne appears to have the unique power of sensing the truth, even when hidden in the darkest corners. Karne hears the truth ringing in his ears. I bet that ringing drives him mad. While Karne refuses to give the Statement of Contrition, he does agree to remain respectful in the future and refrain from real life threats of violence. One can only hope he sticks to his word.

One step at a time, Karne.